She was destined to become Miss Bohol. That unforgettable night last July 22, the stars aligned in her favor and won over the stunning Gazini Ganados, one of the most popular girls to ever compete in Miss Bohol pageant history.

Did you know that the newly- crowned Miss Bohol 2017 almost didn’t get the chance to compete in the province’s most prestigious beauty competition? You see, two years ago, competed in Anyag sa Tubigon 2015, her town’s official preliminary pageant for Miss Bohol. 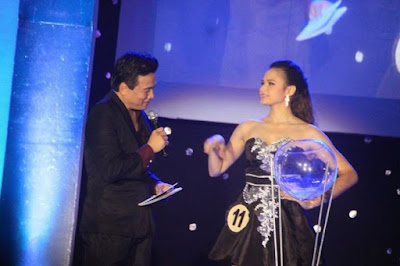 Your Roving Eye with Pauline during Anyag sa Tubigon 2015


She was raw having no prior pageant experience before the Anyag pageant but she had potential for she was witty and very engaging. The 5'9" half- Belgian beauty eventually finished as 1st RU to Olive Zoilo in Anyag sa Tubigon 2015. Ms. Zoilo who recently passed the CPA board exams was Miss Talent and 3rd RU in last year’s Miss Bohol Pageant.

Pauline was convinced by Anyag sa Tubigon pageant organizers and mentors to represent her town this year and she was more than ready having been trained by Tubigon’s formidable team of pageant experts & mentors.

The rest as they say, is pageant history. So girls, never ever think that your journey towards the crown has ended just because you didn't make it the first time. Who knows, Lady Luck might be smiling at you the next time around. Cheers!