Thirty years ago, we were a bunch of dreamy- eyed and idealistic young college students at Xavier University- Ateneo de Cagayan in Cagayan de Oro City who believed that we could make a difference in the world. During those uncertain times at the height of the People Power Revolution, I still remember our professors encouraging us to get involved and to be aware of what was happening around us.

We were miles and miles away from imperial Manila and yet we were one in spirit with the nation as we pitched in and listened to presidential bet Cory Aquino who had called for a boycott of Marcos crony- operated corporations. There was even a noise barrage and other forms of civil disobedience. 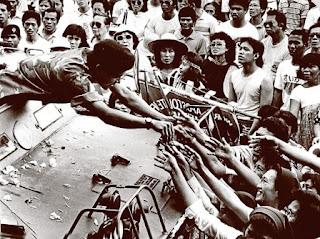 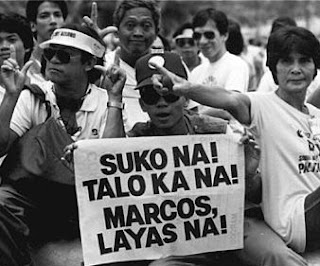 Those were exciting times in the eyes of a young college student who was slowly waking up to the sad realities around him. Remember, this was in Cagayan de Oro City, acknowledged opposition country and the turf of legendary & charismatic opposition leader Aquilino “Nene” Pimentel. 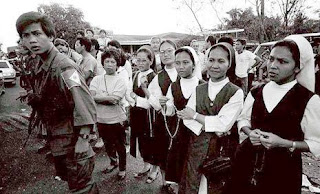 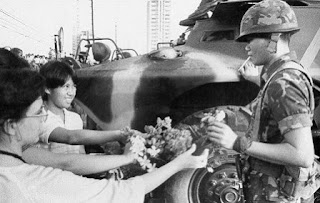 We knew something big that would alter the course of Philippine history was about to happen. We were aware that there was imminent danger especially for those who were in EDSA that time and the only news we got at that time were the sporadic broadcasts on air. 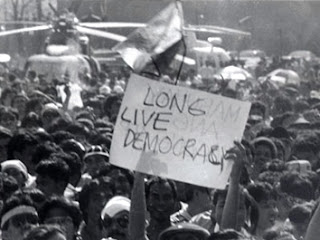 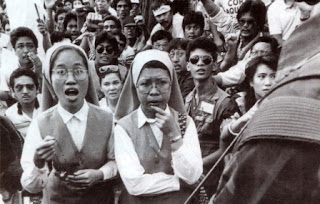 Remember, all these happened during the 80’s when there were no cellular phones and other modern communications technology. Even at those uncertain times, there was excitement particularly for us students and to the radicals. 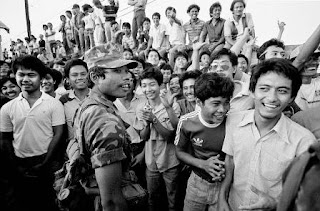 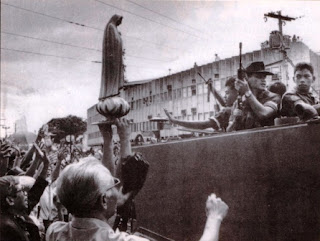 Everything came to a head exactly 30 years ago when our peaceful, active & non- violent uprising was able to achieve what was then unthinkable; oust Marcos from Malacanang and end thirty years of a dictatorship. 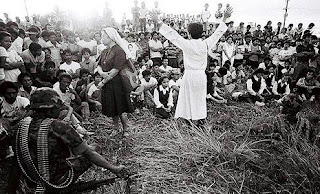 There was jubilation during the next few days and everyone was in high spirits. We all thought that we were finally a nation that was to meet its glorious destiny. 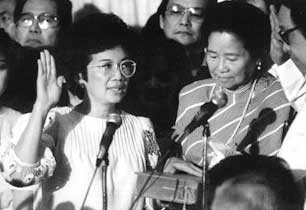 But that’s another story.

Remember, the years may have dimmed the memories but the heart never forgets.

Today is the birthday of an amazing lady whose quiet dignity and inner strength has been a source of pride and inspiration not only to her husband and two grown- up children but also to her family, friends and acquaintances.
And who is our special birthday girl who shares the limelight today with a significant moment in Philippine history, the 3oth EDSA People Power Anniversary? 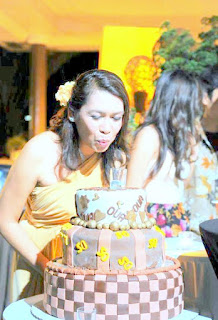 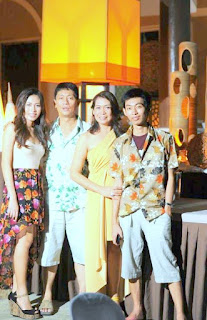 She is a member of what I have coined as the Fabulous February Females and she is Engr. Necie “Oua” Yu, wife of an engineer who is also the vice mayor of Calape, Hon. Nelson “Sonel” Yu and mother & friend to Neil Orven & Kneesa Noreen. 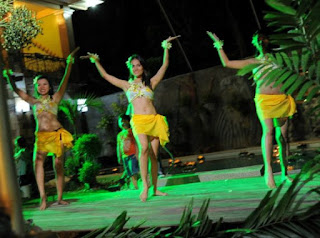 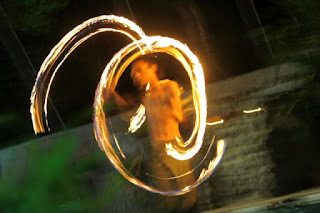 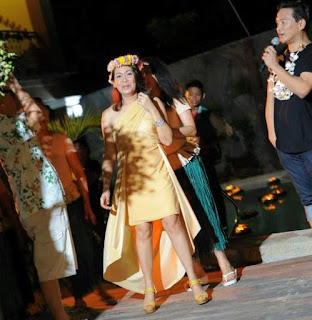 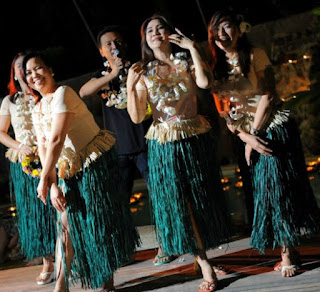 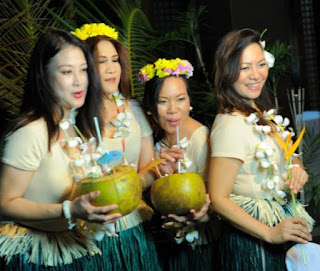 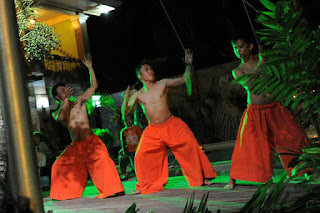 Here are some photos of our birthday belle through the years: 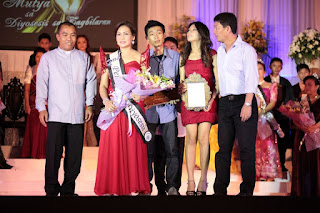 Finally, contestant numbering has just been concluded. Numbers are usually assigned according to height with the tallest girls getting the middle numbers in this case # 20 & # 21 and the rest taper down like the silhouette of a pyramid.

With the pinning & assigning of numbers, the girls can finally heave a sigh of relief and this means that the Bb Pilipinas 2016 season is officially open.

From more than a hundred applicants, 40 hopefuls have been selected as the official candidates for the country’s longest running & most prestigious national beauty pageant.

Three of my pre- pageant faves
For the fourth straight year, a Boholana is absent from the roster of candidates not because there is a dearth of beauty queen material in Bohol but because it requires a lot of logistical support to sustain an almost two-month stay in Manila for the competition.

The last time Bohol was represented in the Bb Pilipinas pageant was back in 2012 with Miss Tagbilaran 2010 Fer Mary Baliquig and former Miss Ubay Karen Gallman as the qualified candidates.

Performance of 2015 Bb Pilipinas titleholders in their international pageant assignments:

2015 has been another great year for Bb Pilipinas titleholders who all placed in their respective pageant missions and whoever will be crowned as this year’s queens will have the formidable task of equaling or surpassing their predecessors’ performances.


The greatest pressure will surely be felt by Pia Wurtzbach’s  successor as pageant fans will expect nothing less than a back- to- back Miss Universe victory. A very difficult and almost impossible assignment I must say but still achievable if everything will be aligned in her favor.

NOTE: Although Parul Shah was the 2014 Bb Pilipinas TOURISM winner, she was appointed by Madame Stella Marquez for she was not able to compete abroad in 2014.

Good luck to all forty fabulous Filipinas as they begin their journey for a Bb Pilipinas crown.

Do enjoy the journey! Cheers!

Photos by Bruce Cassanova for Bb Pilipinas Charities, Inc
at February 24, 2016 No comments: Links to this post

Who Will be Bohol's Bet for Miss Philippines Earth 2016?

Once again, Island City Mall, together with Carousel Productions, takes the first step in the journey of that one special Boholana who will experience that once-in-a- lifetime opportunity to shine in the national beauty pageant stage.

Who will succeed Gayle Suzette Yu as Bohol’s official Eco Warrior? Do you have what it takes to be the Boholana representative for Miss Philippines Earth 2016?

If you have Boholano roots, 18 to 25 years old and at least 5’5” tall, then join the screening this Sunday, Feb 21, 3 pm at the Island City Mall Activity Center.

Bring with you your two- piece swimwear, casual wear and high- heeled shoes. 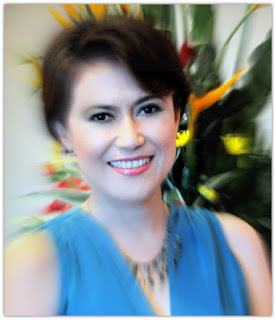 And celebrating her birthday today from across the globe is ageless beauty Elizabeth “Beth” Mumar Anana.  You see Beth is the General Manager of Symmetry Philippines and her birthday happens to be during the worldwide leadership meeting of Symmetry Global Managers from around the world in Houston, Texas, USA.

Beth is one of the most accomplished Miss Bohol titleholders who was honored and recognized during the Miss Bohol 2015 Pageant  along with five other titleholders. The lady who holds the distinction of being the first and only Miss Bohol from her hometown of Guindulman also knows the value of gratitude and of giving back.

Symmetry Philippines an advocate for healthy living thru health & beauty supplements distributorship, was one of the sponsors of the 2015 Miss Bohol Pageant,   annual beauty search for Bohol’s fairest and the glamorous highlight of the annual Sandugo Friendship Festival.

Now that is one amazing lady who possess beauty on the outside and the inside as well.
Cheers Beth!
at February 17, 2016 No comments: Links to this post

A stunning 15 year old half Spanish- half Filipina beauty was crowned Katahum sa Buenavista 2016 last Feb 10, the eve of Buenavista’s 56th Foundation Day anniversary after she bested a field of 35 ladies who represented all of Buenavista’s barangays.

More than just being a pretty mestiza, Kashel Estoce who represented Brgy. Sweetland in the annual pageant, was able to eloquently express her thoughts during the two rounds of interviews. and that boosted by an evident classy & refined demeanor, won for her the crown.


During the final round, the five finalists were asked the same question:

Miss Estose replied" the word is hospitable" The first time I came here, I was warmly welcomed and made me feel so special and that I believe is also the reason why people keep going back to Buenavista"

After all, when the Spanish friars first came to the town, they were so awed and impressed by its beauty that they named the municipality as Buenavista which literally means a good view. The name Buenavista is a combination of two Spanish words namely buena which means good and vista which is Spanish for view or place. 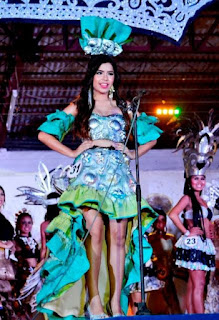 FABULOUS & FAST- PACED PAGEANT The three- hour long Katahum sa Buenavista Pageant  is the biggest municipal- based pageant among Bohol’s 47 towns and it is to the LGU’s credit that all 35 barangays sent a representative for the beauty search. The pageant opened with a dazzling production number where all 35 candidates showcased their dancing talent dressed in their colorful barangay festival costumes.    The girls then competed in their swimwear and evening gowns.  After their pre- pageant scores for onstage interviews & talent scores were added to their pageant night scores, the field was trimmed down to the Top Fifteen.

After the Q & A, the five semifinalists who got the highest combined scores in Q & A plus beauty & charm were declared as the finalists.

Each of the five finalists acquitted themselves well as each gave a unique answer to the final question. Their responses were as diverse as the natural beauty & charm of the place but in the end, Lady Luck smiled at Kashel Estoce who was destined to be crowned as the girl who personified the beauty of Buenavista.

Her pretty & charming mestiza features plus her very spontaneous and unaffected ways helped her sweep all three preliminary rounds in barangay festival costume, swimsuit and evening gown. She was also named Miss Photogenic.

She was crowned by Buenavista Mayor Ronald Lowell Tirol, the 2015 Katahum queen Nina Leopando and Buenavista Vice Mayor Dave Duallo
Named her runners up were Miss Bato- Dashiel Minguito 1st RU, Miss Poblacion- Charlene Marie T. Solana 2nd RU,   Miss Asinan- Nesafe M. Ludia, 3rd RU and Miss Cantuba Ma. Theresa T. Sanchez 4th RU
More than the beauty of the ladies, the title “Katahum sa Buenavista” refers also the beauty & gentleness of Buenavista’s people and the magnificence and splendor of the place which I got to check out when I was invited by youthful Mayor Ronald Lowell “Sample” Tirol  to emcee the pageant. More on the town in the next few blog posts.

Three of the standouts who didn't make the Final Five
Some of the girls who I thought stood out and deserved to be in the winners' circle were candidates # 2, # 13, # 14 & # 20
Special thanks also to the Project Chairs educator Jeanylette C. Ayson, Ph.D. , Kag. Rena Sotto Erojo & Kag. Christine Torregosa. In particular to Kag. Erojo for making me feel at home instantly.

Photo Credits: Ric Obedencio
at February 15, 2016 No comments: Links to this post