Ten years ago, when Anna Maris competed in Miss World 2006, she forged a close friendship with two of her fellow contestants from Asia. That friendship that has endured for a decade now has been strengthened by visits, emails, social media updates & being bridesmaids to their respective weddings.
On her most unforgettable day, Anna was joined by Singapore’s Colleen Pereira & Hong Kong’s Janet Chow who have been both by her side when she walked down the sandy aisle with Tommy.
Now who says pageants can’t be arenas for enduring friendship & sisterhood? 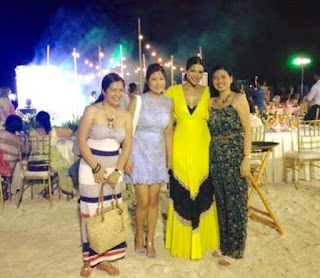 When royalty gets hitched, she deserves nothing but the best especially when styling her wedding is concerned.

That’s what Anna Maris Igpit, Bohol’s pride & first Boholana to win a national beauty title got for her stylish and talked about beach wedding at the South Palms Resort in Panglao, Bohol. 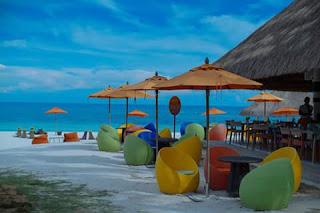 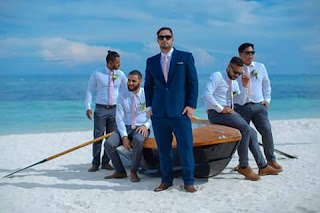 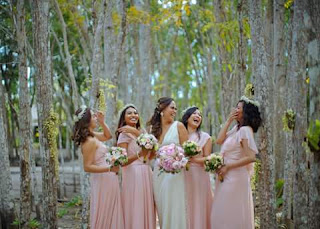 Michael Yu & Joseph Ven Dumadag, the creative tandem behind Blue Grass Project, went full steam ahead and left nothing to chance to give the radiant bride the dream beach wedding that she had always wanted.
For starters, Anna Maris Igpit's bouquet was created out of pink and white peonies, astilbe, rice flowers, eucalyptus, wax flowers and fine fillers with a cabochon gemstone accent. 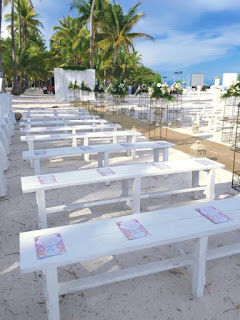 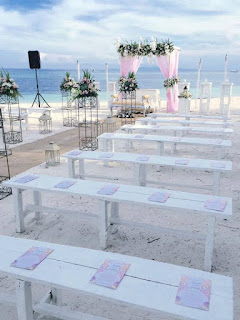 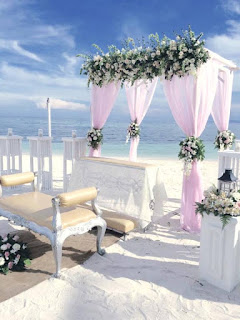 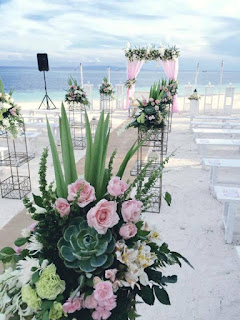 The weather cooperated and gave the couple & their guests the most perfect azure skies that served as canopy during the entire ceremony. 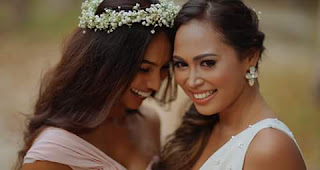 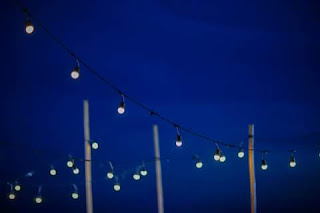 Amidst the gentle lapping of the waves and to the thunderous applause from everyone, the couple was pronounced husband and wife. 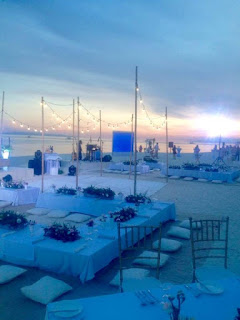 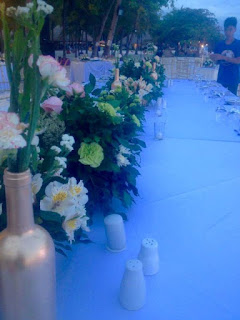 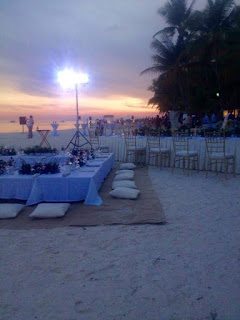 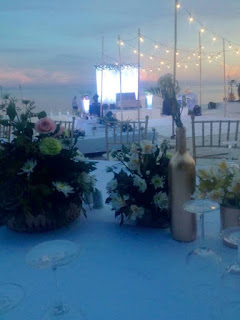 It was a most awesome wedding indeed and thanks to the beautiful people and the impeccable styling of Blue Grass Project who recently got named to the exclusive list of the Philippines' top ten wedding florists by Merry to Marry,  everyone would have something to gush about for days.

Ten years ago, she made history as the first Boholana beauty queen to win a national beauty title when she was crowned the 2006 Bb Pilipinas- World.

After representing her country beautifully in the Miss World Pageant held in Poland, she made a name for herself as a GMA7 TV personality, a pageant mentor, inspirational speaker stylist, events host & organizer.
It was in 2013 when she found herself organizing & pitching in for relief efforts when Bohol was rocked by a devastating earthquake. Her tireless efforts & boundless energy didn’t go unnoticed by media and she was in fact, named one of Cosmo Philippines 2014 Fun Fearless Females for lending her name & voice to volunteerism. 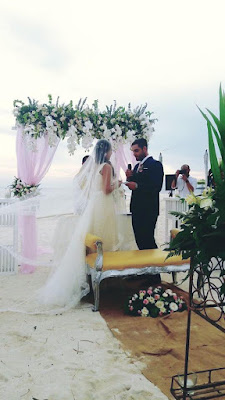 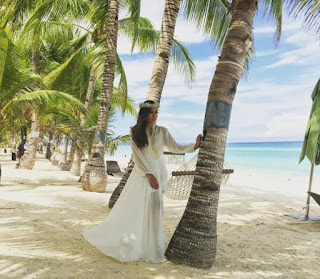 That beautiful Boholana with a heart of gold enters a new phase in her life when she exchanged lifetime vows with Tommy Taylor from Down Under last May 28 at the lovely South Palms Resort in Panglao Island .

A breathtaking scene awaited the guests and the newlyweds when they saw how Blue Grass Project of Michael Yu & Joseph Ven Dumadag turned the place into a most romantic & lovely setting for a beach wedding.
A day earlier, the trendsetting Anna Maris Arcay Igpit, a true- blue Panglao Island lass whose sunkissed complexion, delicate features & towering frame never fails to make heads turn exchanged  “I Dos” with Tommy in an intimate and solemn matrimonial mass witnessed by family & friends and blessed by God at the San Agustin Church in Panglao. 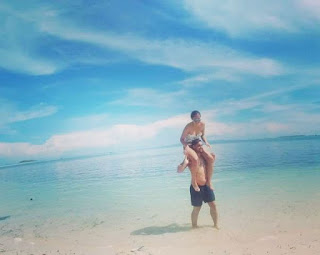 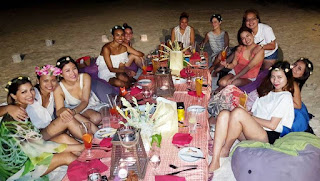 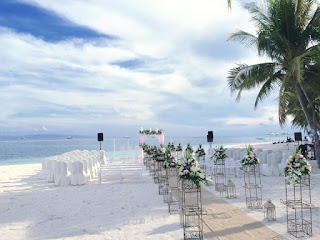 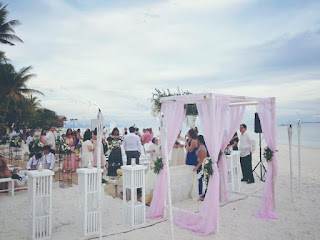 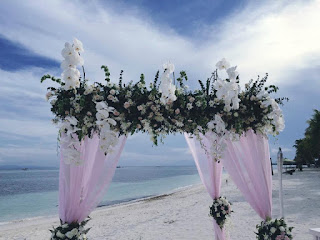 Fr. Val Pinlac who officiated the mass delivered such a beautiful & stirring homily that spoke of the couple’s journey towards the altar.
Principal sponsors included Bohol Gov. Edgar Chatto & First Lady Pureza Chatto, Habitat for Humanity’s Charlie Ayco & Panglao Mayor Nila Montero who has been so supportive of Panglao’s pride that she even accompanied Anna Maris to Warsaw, Poland when the latter competed in Miss World 2006.
at May 30, 2016 No comments:

Hers was a last- minute decision to participate in the ongoing 2016 Miss Philippines Earth Pageant.

Meet Genina Marcelo Abrau, the Boholana who is wearing the sash of San Miguel, Bohol in the 16th annual edition of the search for the country’s environmental advocate.
She emerged as 1st Runner Up to Gayle Suzette Yu in the inaugural search for Miss Philippines Earth- Bohol last year.

The 21 year old BS Computer Engineering graduate from BISU thought that was the last of her stints in pageantry but she was wrong.

Genina got the shock of her life when she received a call from the Bohol franchise holders that she was picked by the committee to represent Bohol this year after the winner Charysse Roferos withdrew from the competition .


She described the pre-pageant activities as hectic but enjoyable & totally different experiences.

She has bonded well with the 45 other candidates from all over the country & from overseas assignments.
Will Genina make the Top 15 and hopefully crack the Final Five?

Find out on the Grand Coronation Night on Independence Day, June 12 and telecast live over ABS CBN Channel 2

Why Tubigon is Currently the Beauty Capital of Bohol

Celebrating nine years of beauty & glamour, Anyag sa Tubigon crowned its 2016 queen last May 15 with another remarkable Tubignon lady who epitomizes beauty, brains & breeding. The pageant was organized in order to serve as a training ground for its young ladies to showcase their potentials and their talents. The organizers’ hard work and determination paid off when it rejoined Miss Bohol again in 2010 after a decade of non- participation.
The northern gateway to Bohol Tubigon struck gold when its bet Amir Sol emerged as Miss Bohol in 2010. Tubigon achieved a rare back-to-back victory when its bet Farah Mian clinched the crown in 2011. Mariecris Evardo placed 1st RU in 2012. The town missed the 2013 edition after its bet didn’t push through with her participation. In 2014, its bet Jaya Lozanowas named 3rd RU. Last year’s bet Clarlaine Radoc emerged 2nd RU

Indeed, the town’s impressive record in the annual Miss Bohol Pageant which is the opening salvo & glamorous highlight of the annual month- long Sandugo Festival is no easy feat. The current decade is shaping up to be the town’s Golden Age in Bohol Pageantry.

THE SECRET TO SUCCESS

Less than a decade after its inception, Tubigon is now reaping its just rewards. So what’s the secret for their remarkable success rate in Miss Bohol? According to Dennis Balbero& Jason Martinote, the Anyag sa Tubigon Pageant gives the official candidates several seminars and workshops, some intended to enhance their physical beauty while others are conducted to develop their character and values.


They are also exposed to different activities such as eco-tours and tree planting to instill in them a love of nature and concern for the environment. Moreover, these candidates are made to attend social functions such as company visits to hone their confidence in dealing with other people.

The pageant organizers also devote a year to groom, train & polish their winners before they are fielded in the province- wide pageant.
MEET THIS YEAR'S MISS BOHOL BET

Expect the outgoing Anyag sa Tubigon 2015 Jean Olive Zoilo and the town’s official bet for Miss Bohol this year to be one of the frontrunners. When interviewed by Your Roving Eye, the 20 year old Jean who recently acquired her BS Accountancy degree admitted to feeling the pressure but she is more than ready to carry her town’s banner this July.

For a town that takes it pageant seriously and fiercely proud of its lovely ladies, no less than a top five finish is expected from Olive Jean Zoilo.
Now you understand how Miss Venezuela feels when she competes in the annual Miss Universe pageant. We await how Jean Olive Zoilo intends to make an impressive showing in Miss Bohol two months from now.

Twenty year old Judiel Israel of Tinangnan expressed shock & disbelief when she was proclaimed as the 2016 Anyag sa Tubigon.

Her reaction was understandable for she was not the frontrunner even if she was one of the prettiest & the tallest girls in the batch. The BS HRM graduate has to put on hold her immediate plans to pursue a career in the hotel industry abroad.
Pipped into second place was 17 year old Joanna Esterado of Centro, one of the heavy favorites going into the final round. Rounding out the top five were 2nd RU Beah Kharmelette Abella of Bagongbanwa, 3rd RU Chrischelle Castanares of Matabao and Lucille Ann Zoilo of Tinangnan.
LIST OF SPECIAL AWARDS WINNERS

It was a most spectacular & grand production of Anyag sa Tubigon 2016 from the energetic & fun opening number up to the thrilling announcement of winners. This year’s Anyag sa Tubigon spotlighted the 12 fabulous finalists and gave homage to the town’s magnificent aquatic resources & its bounty.

The production’s clever use of three huge LED walls that displayed not only the visually stunning computer graphics but also the close up images of the ladies drew applause & cheers from the audience.
The absence of the requisite swimsuit segment makes Anyag sa Tubigon Pageant uniquely different from the other municipal searches in Bohol. According to Sir Jason Barba Martinote, the absence of the swimsuit portion is in deference to the event’s reason for its being which is the fiesta in honor of San Isidro de Labrador.

After their opening dance number where they also introduced themselves with pre- taped voice overs, the 12 candidates competed in the Elmer de Venancio fun wear & evening gown segments and underwent the   one- on- one onstage personality interviews.
Hosting the pageant were ABS CBN Cebu talent Nimrod Cabigas & Anyag sa Tubigon 2010 & Miss Bohol 2011 Farah Faye Mian. Your Roving Eye was invited to co- host the Anyag pageant specifically to handle the Q & A segments. Dennis Balbero directed the fast- paced & exciting two hour show that gave the spotlight to the 12 candidates.

After the fun wear, evening gowns & casual interviews, the field was then whittled down to the final five who answered the same final question “Beauty queens come & go. If you will be crowned as Anyag sa Tubigon 2016, how do you want to be remembered during your year of reign?” 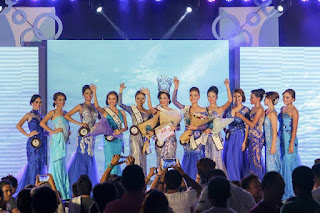 Congratulations again to the winners and the rest of the candidates, to the organizers & the sponsors who helped make this year’s pageant another success.

Here's the link to why Tubigon is currently the most successful town in Miss Bohol during the last six editions of the province's most prestigious pageant:

Why Tubigon is the Beauty Capital of Bohol?