It wasn’t the usual male pageant where the emphasis is focused on the candidates’ physical attributes. 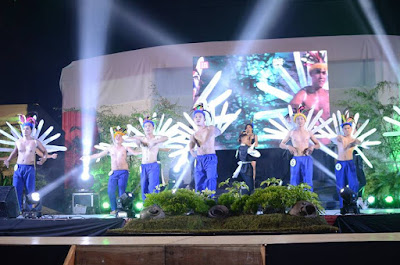 Opening Dance Number
Rtn. Sylvia Delmar Pilayre, Mister Ubay 2018 project chair stressed that the contest was to look for the complete package; attractive & charming, confident, with self- assuredness  & with a facility of the English language. After all, they were looking for a positive role model & spokesperson for Rotary of Ubay’s socio- civic projects. 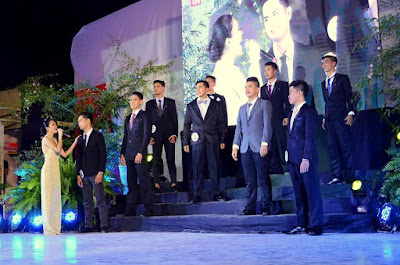 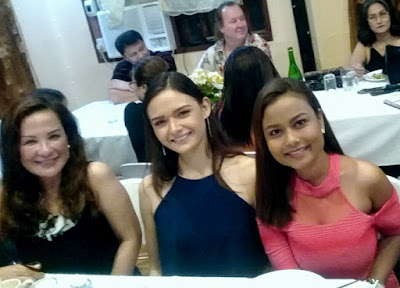 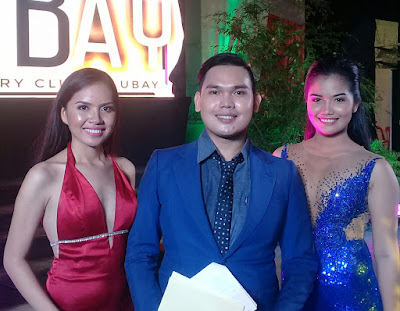 
During the pageant night, the audience roared in delight and adulation as the show opened with all nine finalists in a choreographed dance number followed by their individual introductions. The swimwear, career outfit, interviews, formal wear & talent segments followed. 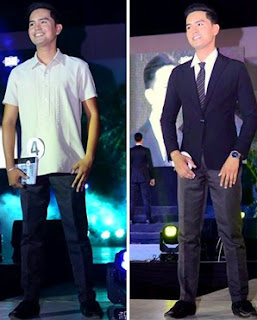 
THE GRAND WINNER Declared the first Mister Ubay was Ariel Cutanda  Rosales, 21 years old and a licensed professional teacher. The boyishly handsome winner impressed the judges and audiences alike with his self- assuredness and confidence especially during the interview phase of the pageant. He bagged most of the awards including Best in Formal Wear, Best in Career Outfit, Best in Prodn. Number & Best in Interview. 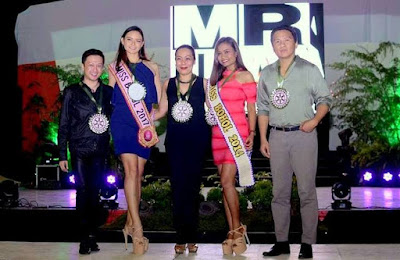 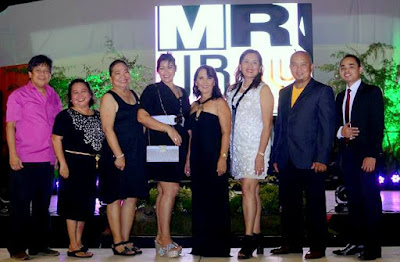 The Quest for Matahum sa Ubay 2018, the most glamorous highlight of the Ubay town fiesta celebration will take place tomorrow, Jan 24 , 7 pm, at the Ramon Magsaysay Memorial Gymnasium.. 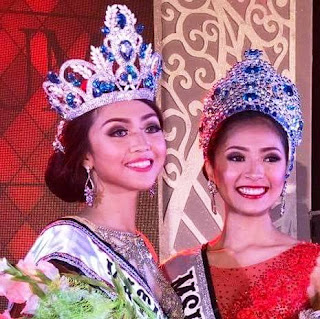 Twelve winsome ladies will vie for the Matahum sa Ubay crown and title currently held by Mary Abigail Jimenez Besas.  The reigning titleholder is a BS Architecture student in De La Salle University while her 1st RU Karen Lynn G. Atuel is a Medical Technology intern at Cebu Doctors University.
Now on its sophomoric edition, the beauty and brains pageant which selects not only the town’s official bet for Miss Bohol 2018 but also a role model and spokesperson for the town’s various advocacy projects is organized by the Performing Artists of Ubay (PAU) in cooperation with the LGU of Ubay. 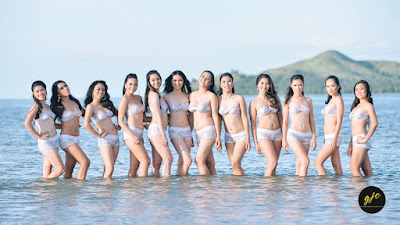 Pageant organizers revealed that the pageant will open with a spectacular dance number and will showcase the candidates in three areas of judging; swimsuits, personality interviews & evening gowns. Earlier this week, the girls displayed their talents in the performing and creative arts before an appreciative crowd from Ubay and neighboring towns.
Who will make it to the final round and who will be Matahum sa Ubay 2018?
Let’s find out tomorrow night! See you there!

Here Are the Winners of the Inaugural Edition of Binibining Danao

It was a whirlwind overnight visit to Danao, the undisputed extreme adventure capital of Bohol. Your Roving Eye was there to chair the panel of judges that would determine who gets to be crowned as the first- ever Bb. Danao.
The glamorous highlight of Danao’s town fiesta celebration was organized not only to select a qualified lady as the town’s bet for Miss Bohol but also to draw attention to the plight of PWD’s or Persons with Disabilities.
Inspired by the success of Glyssa Bingas Perez who gave Danao its first- ever Miss Bohol crown, the organizers were able to gather nine of the town’s fairest to compete in the Bb. Danao 2017 Pageant. Held at the brand- new Louis Thomas R. Gonzaga Memorial Cultural Center, the fast- paced two- hour jampacked show was ably hosted by three witty emcees namely; Jerah Lin Orapa, Dexy Claire Canete and Sherwin Trazo
THE WINNERS Crowned as the first Bb. Danao was Mariel Millanes of Villa Anunciado. The 17 year old morena beauty was also named Miss Eco- Tourism, Face of the Night, Best in Prodn Number, Best in Swimsuit and Best in Interview. Rounding out the circle of winners were 3rd RU Alexa Tahud, 2nd RU Natalie Agunod, Bb Danao Mariel Millanes, 1st RU Jovelyn Torregosa, 4th RU Michelle Hagutin. 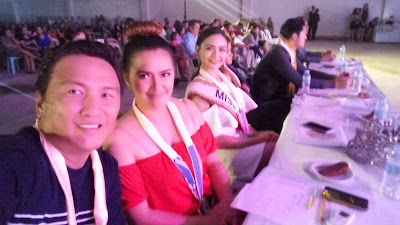 
Project chair was Maam Annabelle Anunciado, Floor/Stage Director: John Kristian Busalanan, Music Director: Sarah Mae Lago and Backstage Committee: Jovencio Lofranco. Special thanks to the UDEC committee, Danao youth volunteers and the DOH HRH nurses. Special thanks to Lirio Vitor and Kag. Ginas E. Cenabre for the transportation and Mayor Naty Gonzaga for the accommodations and the complimentary tour and rides at Danao Adventure Park.
While waiting for the show to start, Your Roving Eye had a casual chat with Mayor Naty Gonzaga who I congratulated for the town’s brand- new cultural center and the remarkable signs of economic activity in the town. Mayor Gonzaga shared that she’s very proud of the town’s people who are now empowered through livelihood projects and opportunities that have been supported by funds and technical know- how by various govt. agencies.

Coming Up: Your Roving Eye Takes The Plunge!
at January 23, 2018 No comments: Links to this post

Your Roving Eye, along with a select few of Direk Maryo J Delos Reyes’ close Boholano friends was invited to the celebrated and talented Boholano film and TV director’s annual New Year Thanksgiving Party last December 30 and held at his sprawling Celebrity Ville property at Dao, Tagbilaran City.
The multi- awarded Boholano TV/ film director who is also in talent management has been very instrumental in the discovery of Boholano talents in the performing arts.

The annual event organized by Direk Maryo’s confidant & business associate Gerry Lugod and which Your Roving Eye first attended in Pansol, Laguna way way back in 2005 gathered some of Bohol’s most promising talents in acting, singing and modeling as well as industry talent agents and scouts.
at January 22, 2018 No comments: Links to this post

Beauty pageants are certified crowd- drawers especially during town fiesta celebrations in Bohol. There is always something magical when a bevy of beauties sashay onstage. The lovely hopefuls never fail to bedazzle an entranced crowd.
Two nights ago, the municipality of Valencia highlighted its fiesta celebration with a dazzling and glittering pageant that climaxed with the crowning of DepEd’s bet Chime Marie Pajo as the town’s fairest. Named 1st RU was Ma. Venus Caipang of District 5 and 2nd RU was Azil Mae Catian of District 3.
Ten ladies competed in swimwear, evening gown & interviews during the pageant night. Their scores that night along with the talent competition determined the top three girls who advanced to the final round.

Lending an air of romance and star wattage to the pageant was the presence of fast- rising singer- songwriter TJ Monterde who serenaded the girls and the audience. 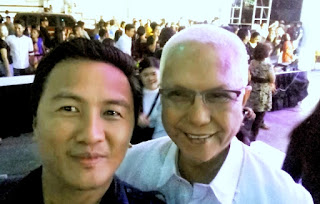 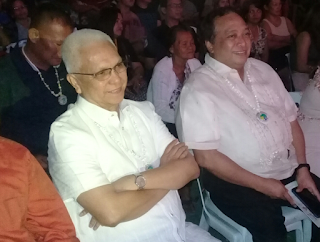 Congratulations to all the winners and kudos to the Miss Valencia 2018 organizers especially pageant director Jay Angelia for the spectacular fast- paced show that incorporated topnotch production values!

Who Will Wear the Matahum sa Ubay Crown for 2018?

The Matahum sa Ubay crown, designed and created by Shandar, represents the environmental, cultural significance, and mystical embodiment of the Ubayana beauties.

The crown is round to symbolize the cooperation and unity of all Ubayanons toward a universal goal of saving the environment of Ubay. The design also features two kinds of gems, the aquamarine beryl and the diamonds. The crown has 44 gemstones representing the 44 united barangays of Ubay. The central design is an upside-down droplet symbolizing an abundance of clean water, renewal, and change. 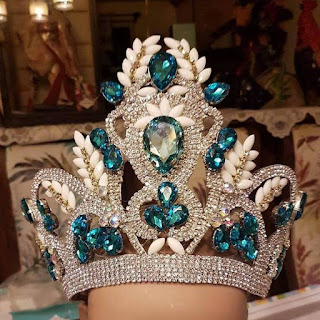 Who will wear the Matahum sa Ubay crown for 2018?


It also symbolizes that the holder will aid Ubay as an attraction of future good prospects. The laurel leaves also symbolizes an environment friendly Ubay. The recurring and parallel spirals symbolize balance, passion, evolution and holistic growth.

The beauty and brains pageant which selects not only the town’s official bet for Miss Bohol 2018 but also a role model and spokesperson for the town’s various advocacy projects is organized by the Performing Artists of Ubay (PAU).

Scores of club presidents from parts of the Visayas and Mindanao and V.I.P. guests led by District Gov. Art Tan and spouse Len attended the coordination meeting where updates and concerns regarding activities and project implementation were discussed. 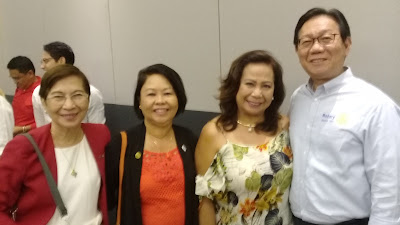 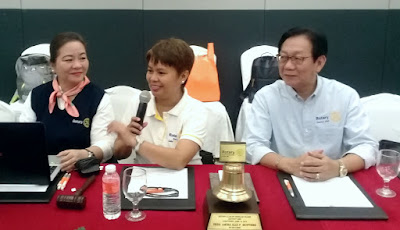 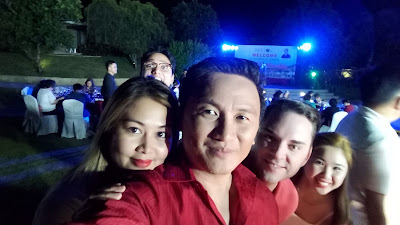 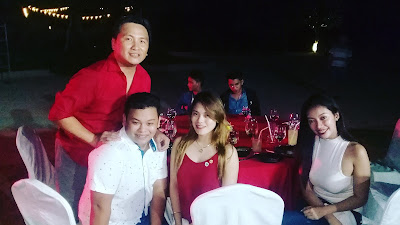