Why Brigitte is Miss Bohol Sandugo 2013

Although this blogger and many others had picked her as one of the strongest contenders and was expected to place in the recently- concluded Miss Bohol Sandugo 2013 Pageant, a lot of pageant watchers and fans were taken by surprise when she won Bohol’s most prestigious beauty pageant title

Brigette had competed in quite a number of beauty pageants.

Of course, there were frustrations and disappointments but most of the time, she emerged as winner or runner up and had collected beauty titles

BRIGITTE IS NO BIMBO

Brigitte has another thing going for her. She also excels in her academics.

Now that is a solid testament of her determination, drive and discipline to excel in the fields that she has forayed in

Importantly and without hesitation, she can rightfully claim to be a role model for other students to look up to

Being picked as Miss Bohol Sandugo 2013 from a competitive batch of candidates naturally has thrust her into the spotlight.

The public scrutiny and the intense media glare has been quite overwhelming.

Brigitte has remarkably shown a lot of class and restraint as far as handling her critics and addressing the issues raised against her Miss Bohol Sandugo triumph.

By not reacting to them at all, she has shown her magnanimity as a victor and has proven to everyone that she can roll with the punches and that she can take care of herself

Admittedly, Brigitte who represented the Municipality of Alicia in this year’s edition of Miss Bohol Sandugo was not the most facially beautiful nor was she among the tallest girls from the Batch of 2013

But on pageant night and when it mattered the most , she unleashed her pageant arsenal of wit, poise and charm. You just can’t ignore her commanding stage presence. 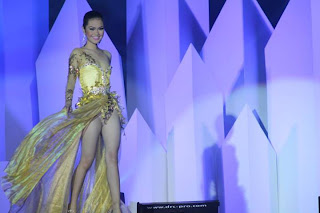 She showed them that she had the personality and aura of a queen. Her confidence and self- assuredness showed in her graceful strides and very fluid movements onstage.

She came across as very relaxed and looked like she was actually enjoying the whole pageant experience.

Her winsome and captivating smile just lit up the entire stage and helped her stand out.

So how did she end up stealing the thunder from the frontrunners and the early pageant favorites?

I am one of those who believe that beauty queens are made not born.

Brigitte didn’t just wake up one day and decided to enter the pageant and win it all.

Her recent victory was the result of hard work and sacrifices.

The previous pageants that she entered before were all learning experiences for her.

The good student that she is, she studied them well and soaked up everything.

By the time she was onstage with 17 other Boholanas and competing for the Miss Bohol Sandugo crown, she was already a polished candidate who knew how to downplay her weaknesses and knew how to highlight her strengths.

Even her choice of evening gown was a brilliant pageant maneuver that had everybody talking days after the pageant.

Here's the link: The Controversial Gown

In the end, she parlayed her competitive edge into a Miss Bohol Sandugo victory

MY HUMBLE TAKE
It is always inevitable that people talk after a new pageant queen is crowned.

You see, Beauty is relative and how a candidate handles the final interview is very subjective and therefore dependent on the tastes and preferences of the judging panel.

"Long May You Reign, Brigitte!"