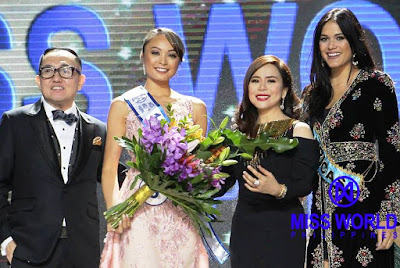 Glyssa Perez is named Miss World Philippines 2017 1st Princess
Prior to revealing the names of the Top 15 semifinalists was the announcement of the winners of the five Fast Track Challenges which gave the winners automatic tickets to the semis.  All fast track challenges were conducted weeks leading to the pageant night.

The fast track challenge winners were:

Candidate #3 Glyssa Perez was named the winner for Sports Challenge which was held at Victoria Sports Tower last August 17. The whole- day sports activities had the girls divided into five groups and prior to tackling the various sports activities that challenged their physical capacities, they had to come up with their group yells & cheers.

After getting the FILA/ Sports & Fitness award, Glyssa & the other fast track winners led 11 other girls into the top 15 where KC Montero engaged them in a casual chitchat to give the audience and the judges a glimpse into their personalities.

For the top ten Q & A, Glyssa got a “personal question”.

Living from a different country to the Philippines, one thing that I feel that I taught my parents is trust.  Because being the only girl in the family with three brothers, you could just imagine how protective they are.

As I said earlier, trust is what I taught my parents because they allow me to loop two countries because I’m so passionate about serving the community that I’m here standing in front of you all to do what I’m passionate about.

As predicted in an earlier blog , Glyssa did bring on her A- game and, with her impressive and heartfelt Q & A performance, she finished strongly as 1st Princess.
Her roles and responsibilities include appearances with the other MWP 2017 winners and should one of the crowned winners cannot fulfill their contractual obligations, Glyssa takes over.
The 23 years old who graduated with a BS Commerce degree major in Finance during her college days in Australia where she spent her growing up years, she was awarded for the Best Endeavor in Finance 2015.

Beauty runs in her bloodline and in fact, she and reigning 2016 Miss Universe Philippines Maxine Perez Medina are first cousins. She was crowned the 2014 Miss Philippines Australia where she represented the Visayas Association of Australia Inc.. In the same pageant, she  also won the Best in Filipiniana, Best in Swimsuit and Best in Evening Gown special awards. 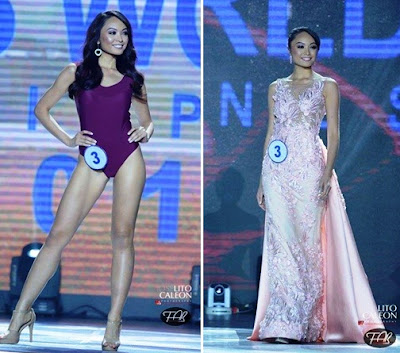 Year 2016 was memorable for Glyssa  After getting crowned as Miss Bohol 2016, she represented the province in Miss JCI Visayas and after winning the regional title, she went on to win the national title of Miss JCI Philippines as well.