This year’s Hudyaka sa Panglao Festival exceeded almost everyone’s expectations. From the nightly carnival rides & varied entertainment fare that brought excitement & glee to the townsfolk down to the many invitations from friends in this tropical paradise.
Buffet tables groaned with delectable fiesta fare and of course, the obligatory selfies and beso beso. Beyond the pomp and pageantry, the festival which fused music and colors into one joyous activity was the Panglaoanon devotees’ way of paying homage and thanksgiving to their patron saint for blessings received through his intercession, by way of celebration.

As Panglao progressed through the years from a humble and sleepy fishing and farming community into a bustling ecotourism community, the festival answers the need for the town to showcase its way of life & rich cultural heritage to the visitors and tourists who flocked to Bohol tourism’s crowning jewel.
The highways and the side streets leading to the town plaza and along the parade route were closed to traffic. Panglaonanons, revelers and visitors alike had to brave the heat and glare of the sun just to witness and participate in the merrymaking. 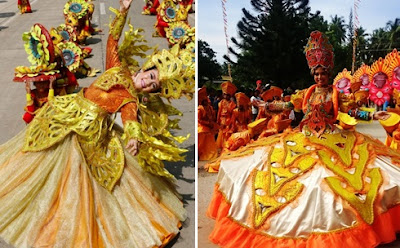 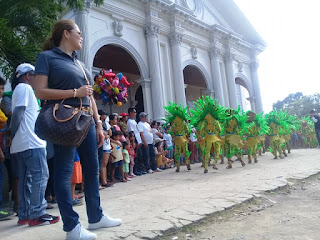 Panglao has so much to be thankful for. After harvesting a bounty of  awards for Best Municipal Police unit, Panglao won  recently the Third Most Competitive award among 1,500 local government units in the country, under the 3rd-6th class municipality category, in this year's Annual Cities and Municipalities Competitiveness Index (CMCI) by the National Competitiveness Council.

Mayor Montero received the award during the 5th Annual Regional Competitiveness Summit two weeks ago at the PICC in Manila.
Vice Mayor Pedro Fuertes confirmed the award conferred on the Panglao LGU, adding that the town was also named among the top 20 finalists in the search for Galing Pook Awards 2017. The LGU's entry program was “A Purok-Based Approach in Basic Education Reforms/Turo-Turismo: Strengthening Partnership and Industry Linkage for Effective K-12 Implementation.”
at September 28, 2017