Joie de vivre (French pronunciation: ​[ʒwa də vivʁ], joy of living) is a French phrase often used in English to express a cheerful enjoyment of life; an exultation of spirit. It may be seen as a joy of everything that involves one's whole being.

The popular French phrase that is synonymous with exuberance, cheerfulness, happiness and love for life captured the essence of the 6th Grand Reunion of the prestigious Central Visayan Institute Foundation of Jagna, Bohol marked a month ago with a meaningful and colorful celebration. For three days, Jagna Gymnasium and the Quinale Beach Resort in Anda, Bohol reverberated with the joy of seeing old and new faces.

Even if matching names with faces of classmates and dear friends and teachers was quite a challenge for some, it was a celebration that was talked about for days.


The hard work, the lack of sleep and frazzled nerves that came with the series of coordination meetings that preceded the celebration paid off with the record number of attendees that came for the reunion.   Batches 1970, 1971, 1973, 1977 and 1986 headed by Mrs. Emily Yap-Castro, Mrs. Manol Tan, Mrs. Louella Gulle Bantol, Mrs Jovita Acha,  and Anna Liza Mozo Españo with Engr. Teofisto T. Pagar , Jr. respectively, were the batch hosts.


Ms. Anna Liza Mozo-Españo together with Engr Teofisto T. Pagar, Jr. of Batch 1986 presided the series of meetings in July, August and September, 2017.  The final meeting was held last January 27, 2018.

Batch 1986 used the power of social media to connect with the alumni from here and abroad. The Facebook page CVC-CVI-CVIF 6th Grand Alumni Homecoming was created specifically for reunion updates.  The video message of celebrity Ms Regine Tolentino added to the curiosity and excitement of the attending alumni. 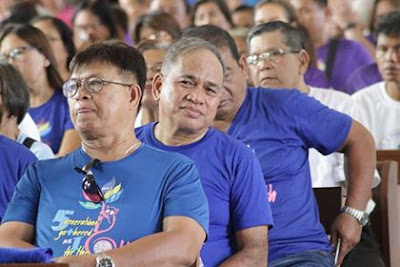 The much- anticipated reunion drew 1,514 alumni on the first day. Ms. Anna Mozo Españo with some friends and licensed Zumba  Instructors led a dance fitness activity and a Retro Zumba while registration was going on. The presence of actor Jerould Gold Azeron, a son of an alumnus Angelito Aceron from  Batch 1986 added to the " kilig" moment of the alumni who wanted to take pictures with him. 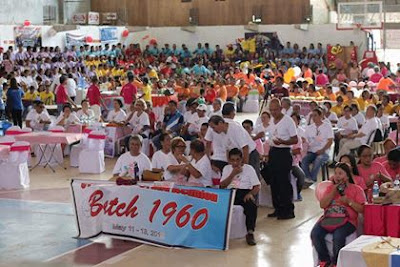 Day 2 at Jagna Gymnasium lunch post the parade
HOMECOMING HIGHLIGHTS were the Thanksgiving Mass and parade led by Tres Miguelians Drum and Bugle Corp with a record number of more than 2,000 alumni participants. The parade participants’ colorful uniforms drew attention from both pedestrians and motorists.

The second day held at the gymnasium was not only full of prizes and surprises but also of nostalgia as batches alternately went onstage for group photos. 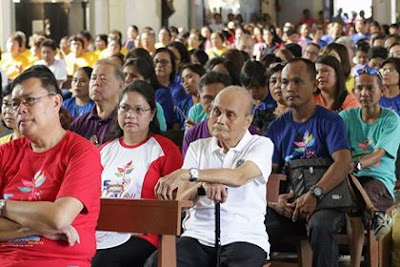 Day 2 Mass and Parade: in photo is oldest registrant Tony Madera of Batch 1942 (in white)
The Fellowship Night, “The Night of Dancing” gave the alumni more time for bonding and to showcase their dancing talents through their group presentations.

The third and final day in Quinale Beach was a Hawaiian Beach Party with Hawaiian and South Pacific- inspired dances, a luau and more bonding moments. 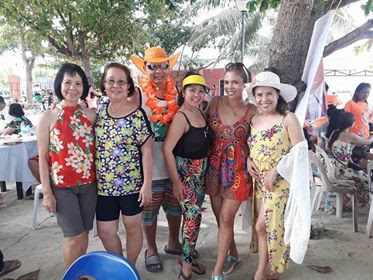 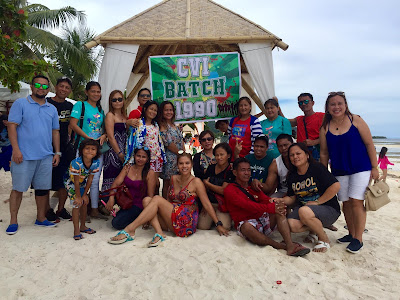 Batch 1990 led by Class President & Valedictorian Celevel Ranoco- Butler
A Grand Reunion is the best time not only to gather and see old faces once again but also to give back and look back to the school that contributed to who and what they are now.

Meeting people from the past & present generations who have been part of their Alma Mater and sharing old stories and making new memories was the best part of the reunion. 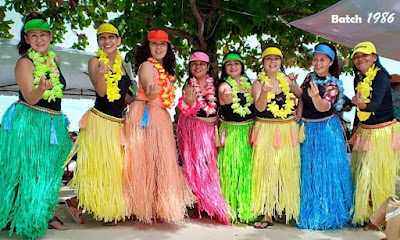 Batch 1990 led by Class President & Valedictorian Celevel Ranoco- Butler
Congratulations to the people who organized the 6th Grand Alumni Homecoming, to the Alumni who responded to the clarion call and made the reunion a rousing success and to the generous sponsors.