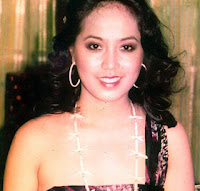 It's Bb. Pilipinas season once again and so we take a look back into the past and remember the beautiful Boholanas who placed in the country's most prestigious beauty pageant.

Back in 1979, a lovely lady from Loboc, Bohol won 1st RU and was chosen asMiss Lux in the Bb. Pilipinas Pageant and thus became the first Boholana to place in said pageant.

What made her feat truly remarkable was the fact that she made it on her own with no connections whatsoever and it was a very competitive batch that included Criselda Dang Cecilio, Bb Universe, Mimilanie Laurel Marquez who eventually won the 1979 Miss International title and of course the very controversial Ma. Theresa "Si Ako, Si Ikaw" Carlson, Bb. Young International who passed away in the mid- 200's under very mysterious circumstances

The name of this fresh- faced Boholana beauty? Perla Salig 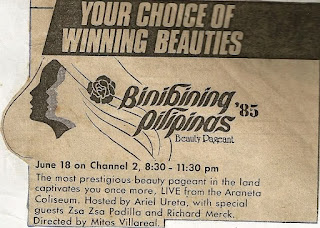 Another Boholana beauty Taina Manigque, a member of the exclusive Mondragon Triumph Court of Fashion, was a Top Fifteen Finalist and Miss Lux Awardee in the 1985 edition of the pageant

Another Boholana, Rich Asuncion, equalled Perla's feat when she also  placed as 1st RU in the 2009 edition of the Bb. Pilipinas Pageant. 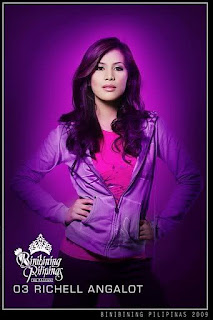 Anna Maris Igpit however is the first and so far, the only Boholana to have won a Bb. Pilipinas crown. She ensnared the 2006 Bb. Pilipinas- World crown and represented the country later that year in the Miss World Pageant held in Poland.

She didn't make the cut in the SMS- driven preliminaries but her exotic charms proved to be a big hit in Poland when she was selected by Poland's widely- circulated and most respected paper as one of the "Five Prettiest Miss World Girls for 2006".
INTERESTING TRIVIA ON BOHOLANAS WHO MADE A MARK IN BB. PILIPINAS

1968. Emma Mumar is the first Boholana to place as a Bb. Pilipinas semifinalist which she did in the 1968 edition of the pageant. 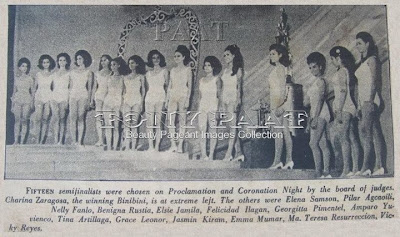 1979. Perla Salig is the first Boholana to win a special award in Bb. Pilipinas. She was one of the Three Miss Lux Ladies in 1979.

She is also the first Boholana to place in the winners' circle when she was selected as 1st RU to Criselda "Dang" Cecilio, Bb. Universe that year

With her stunning looks and gift of gab, Ms Burden impressed a lot of pageant watchers and organizers. Right after the Bb. Pilipinas Pageant, Rowena was approached by Madame Stella Araneta and was requested to acquire some training and come back the following year.

She declined saying she wanted to pursue her medical degree and she joined mainly for the experience.

2009. Rich Asuncion is the first and only Boholana to have won the Miss Talent award in Bb. Pilipinas.

She also won two special corporate titles
2012. Karen Gallmann of Ubay who competed in the 2012 edition of the pageant is the first and only Boholana to have won the Miss Photogenic title.

Miss Gallmann, a pre- pageant favorite, also ended up as a Top 12 Finalist

Only the Best in Swimsuit special award remains elusive to the Boholana who has competed in Bb. Pilipinas but then as Reigh Monreal, Bohol's foremost beauty pageant connoisseur pointed out recently and if the Wikipedia entry is accurate, then we may have won it already.

Karen Gallmann: the only Miss Photogenic


You see, the 1988 Bb. Pilipinas- Universe titleholder Perfida Limpin and who was also selected as Best in Swimsuit listed Tagbilaran City, Bohol as her place of birth

I just found out from fellow Boholano bloggers that Noella "Ella" Evangelista traces her roots in Bohol. Although born and raised in Iligan City, the 5' 9" dusky charmer has Boholano parents so she IS 100% Boholana.

Ms Evangelista was Bb. Pilipinas 2nd RU in 2003 and represented the Philippines in an international beauty tilt, the Queen of Tourism 2004 in Mexico City which she also won.

For the record, the victory in Mexico would make Ms Noella "Ella" Buhion Evangelista as the first and only Boholana to have won an international beauty title
With so many European expats settling in Bohol the past few years, it would come as no surprise that the next generation of Boholanos would be a veritable minefield of gorgeous Eurasian girls to complement the surfeit of dusky beauties and stunning Fil- Am girls

Who knows? A future Bb. Pilipinas titleholder just might surface from among these girls in the next decade