It saddened & frustrated many pageant enthusiasts when it was confirmed that the reigning Miss Candijay Najwa Bordbar who is of Filipino & Iranian lineage is not joining the pageant for still unknown reasons.
The Miss Candijay 2014 Pageant was specifically mounted last year to select the municipality’s candidate for Miss Bohol 2015 and just when the town had selected a very strong representative, the news comes out that the winner is not competing.

Despite this setback, Candijay's First Lady Ms. Lex Tutor who organized the pageant last year with the full support of her hubby Mayor Chris Tutor  is not disheartened with the turn of events.

She is in fact more determined to hold another search which she believes is an avenue for the local girls to develop themselves and an opportunity to represent & showcase the town of Candijay in the Miss Bohol Pageant which is one of the most awaited highlights of the Sandugo Festival. 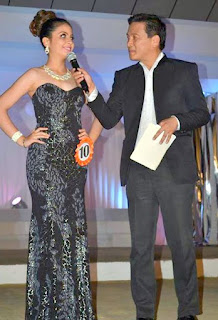