Ma. Teresita Veloso- Abueva of Duero, who was fondly called as “Ching” by family & friends,  reigned as Miss Bohol 1953 during the innocent and more carefree 50’s decade. She is the daughter of Hon. Teodoro L. Abueva, a Boholano congressman and Purificacion (Nena) Gonzales Veloso, president of the Women’s Auxiliary Service.

Her father was a friend and contemporary of former Philippine President Manuel Roxas and Ambassador Narciso Ramos. He was a member of the Provincial Board, and later became the Provincial Governor of Bohol. He ended his career as a Congressman in 1934. Both of Abueva’s parents died serving their country.

She has six other brothers & sisters: the distinguished Dr. Jose “Pepe” V. Abueva, former President of the University of the Philippines, Filipino educator, author, professor and civil servant and Napoleon “Billy” V. Abueva, National Artist in Sculpture, Teodoro (Teddy), Jr., now based in New York, USA; Purificacion (Neny -deceased), married to Atty. Ramon Binamira (dec.) of Tagbilaran City; Jose Abueva (Pepe), former president of the University of the Philippines; Amelia Martinez (Inday), now living in Chicago;  and Antonio (Tony), a landscape artist who met a tragic fate aboard Princess of the Orient; his body has not been found.

Ching, a retired teacher who has a Masters in Education, migrated to Australia in 1971 and stayed abroad for almost 40 years before flying back home and retire in quiet and peaceful  Handurawan, Duero, Bohol. She whiles away her time doing the things that she loves the most like painting, baking & cake decorating. 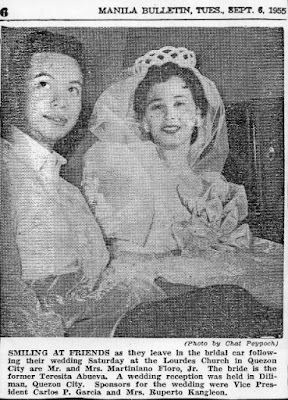 Society Wedding of the Year


She recalls the excitement that was generated when the first ever Philippine International Fair in Manila was organized in 1952 to showcase the country’s progress and to extend goodwill and international friendship.

Luneta was chosen as the venue of the Fair. People came in droves for the fair had a man-made lagoon, pavilions and booths. The most attractive highlight however was the selection & coronation of Miss Philippines 1953.  Women from all walks of like showed up to join the competition. Promising movie stars, glamorous high society girls and unknown provincial delegates all came rushed to join the competition. Stunners like Gloria Romero & Imelda Romualdez were installed as the favorites but it was Maria Cristina Galang, the daughter of former Tarlac Governor Alejandro Galang who walked away with the crown.

Cristina's victory was significant for she was crowned by no less than the visiting 1st Miss Universe of 1952, Armi Kuusela of Finland
at July 16, 2015